After Huawei was caught unfairly boosting benchmark scores last month, we were contacted by reviewers from Tech2 who had similar concerns about Oppo smartphones.

UL has clear rules for manufacturers that govern how a platform can interact with its benchmarking software. The purpose of these rules is to ensure that users get benchmark results that accurately reflect the true performance of the device for apps and games.

After reviewing Tech2's benchmark results, and conducting testing in our own lab, we have decided to delist the affected models and remove them from our performance rankings.

The Oppo Find X was ranked #4 in our list of the Best Smartphones for 3DMark Sling Shot Extreme performance. It now appears unranked, and without a score, at the bottom of our rankings. 3DMark scores from delisted devices should not be used to compare models. 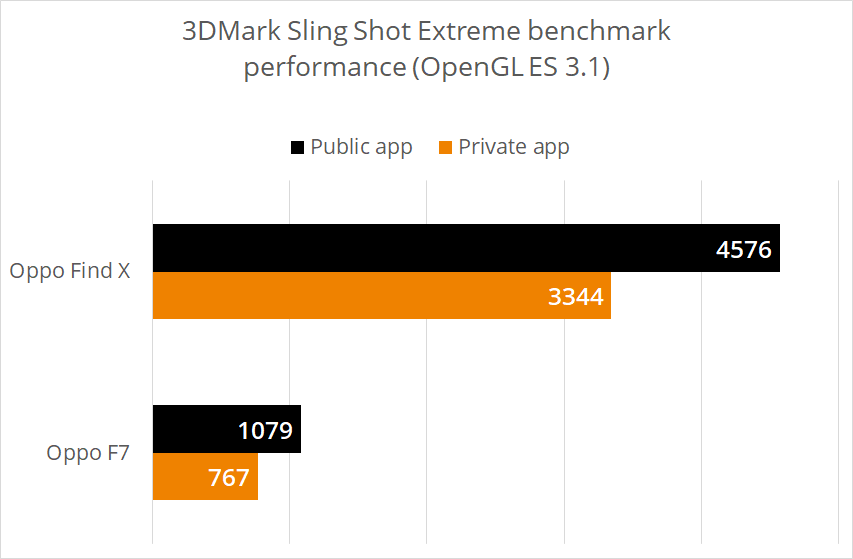 This kind of detection and optimization is forbidden by our rules for manufacturers.

We contacted Oppo with our findings. Oppo admits that the devices are detecting the public version of the app,

"When we detect that the user is running applications like games or 3D Benchmarks that require high performance, we allow the SoC to run at full speed for the smoothest experience.

Oppo explained how its devices manage power and performance for other apps that are not recognised,

"For unknown applications, the system will adopt the default power optimization strategy...After the user has not actively operated for 5 to 10 seconds, the device limits the system performance to 70% to 80% of the maximum performance (according to different platforms)...When there is a user operation, it will immediately cancel the performance limit, to ensure that the user experience is not affected."

In practice, this means that it is possible to improve performance in most apps by continually tapping on the screen. However, this has no effect on the public 3DMark app. Nor do we consider such tapping an accurate way to benchmark a device due to the variability in performance that it introduces.

Fortunately, Oppo also said that it is looking to improve on this approach for the benefit of its users.

"At the same time, we are working on upgrading the system, and strive to distinguish between the requirements of undetected apps or the subjective needs of users."

Under our rules, optimizing performance by detecting heavy computation demands is allowed. Simply detecting the benchmark app by name is not. A device must run the benchmark as if it were any other application.